How does a laser cutter work¶

Laser cutting is a relatively simple technology that allows one to create accurate structural elements from sheets, for LaOS with a typical thickness of 0.1 to 10 mm. It works like a pen plotter with the pen replaced a cutting laserbeam.

In the back of the machine sits a laser tube that emits a (almost) parallel beam of light of one wavelength (color). This is a very powerful but precise light beam. With the help of mirrors the movement of the laserbeam can be controlled. In case of a CO2 laser, as commonly used in small laser systems like LaOS, the laser light is in the infra-red range and therefore invisible for the human eye. Usually a small red pointer is attached next to mirror nr. 3 to show where the laser will hit the material. So the red dot is just a positioning help, not the laserbeam.

The laserbeam will heat a small area on a material extremely in a short period, causing the material to locally melt, burn or vaporize. As the beam is very thin, a material can be precisely cut or engraved. 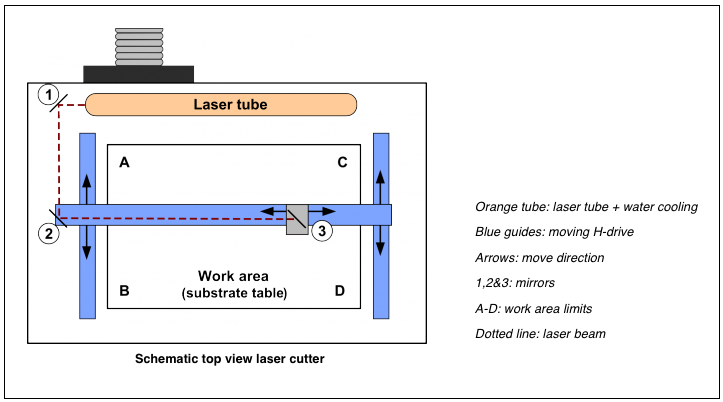 Electronics will move the mirror guides as defined by the input file of a drawing. The machine will have other components like an exhauster for the fumes, cooling for the laser tube, a substrate table, air assist to blow the fumes away from the lens, a laser safe covering and a control panel. Lasers can be dangerous, that is why the cutter is in a totally metal enclosure and the lid has an IR-absorbing window. The laser will immediately cut off when the lid is opened.

The last mirror (mirror 3 in the picture) will guide the laser beam down to the material on the substrate table. The mirrors have to be aligned to accurately position the laser beam. During the use of the laser the mirrors can shift slightly so regular checking of the mirror alignment is wise and adjustment if necessary.

In a laser cutting system a lens is used to concentrate the laser beam. This requires the workpiece to be in focus of the laser beam. The substrate table can be moved up or down to adjust the height of the workpiece relative to the focus point. A ruler with the focus distance is delivered with the laser system. Because of the lens the cut is not exactly vertical. With a thicker material the result can be better when the laser beam is slightly out of focus on the surface.