Added by markp over 7 years ago

Where can I find the up-to-date KiCAD schematics?

The git (https://github.com/jrv/laos-hpc-brd) only contains v0.1.

RE: Schematics - Added by jaap over 7 years ago

The one you found on GitHub is not a production design (yet), it's a
two-axis low cost minimal design for cheap lasers.

RE: Schematics - Added by jaap over 7 years ago

All schematics moved to Github:

RE: Schematics - Added by Anonymous over 7 years ago

Please consider publishing a PDF of the schematics somewhere as well, for the KiCAD noobs, -deprived, or -averse.

RE: Schematics - Added by hugomeiland over 7 years ago

to resolve bug 56 (fase out svn) here are the files on git: https://github.com/LaosLaser/Hardware/tree/master/laos-board-rev4

RE: Schematics - Added by KalleP over 6 years ago

I would very much have liked to have had a schematic for the I2C LCD terminal last night. I managed to get sorted out eventually as follows.

I can not find any schematic in PDF or SVG format to look at or print out and have not been brave enough to try and install KiCAD just yet (my hdd is near full so I am careful of what I install at the moment). There would be more comment from the community if information was visible.

I drew and cut (with my first engraving test that worked well) a rocker button (from 3mm perspex, I have tried to attach the SVG file) for the 5-way button and then managed to have a bit of glue run down into the plunger part of the switch when I was putting it on (do it upside down next time) so the OK function no longer moved and 3 of the directions no longer made contact (testing with the multimeter is tricky in or out of the board). I had to make a small proto-board with 5 buttons so I could operate the laser until I could replace the switch.

The switch pin-outs are described in a couple of RS/Farnel/ALPS data-sheets but they fail to indicate the microscopic Dent that is used to orient the switch on the assembly wiki page. There is no obvious way to see what the common pin would be on the PCB from the switching arrangement because they chosen keys cover a subset of a 3x4 key matrix. After bashing my head for a long time it eventually dawned on me that there HAS to be some way that ALPS will have made the switch position determinate. I spent further time and eventually the drilling template caught my eye and I saw that the pad layout was NOT symmetrical. The middle pins on the sides are shifted down by a tiny bit. The switch is mounted in the I2C board upside down (middle pins shifted up) with pin 1 bottom right and pin 4 (common) top left (anticlockwise numbering like an IC).

The hole layout for the component should be altered on the PCB (perhaps done on ver 0.4 already) to move the middle holes up so the switch can be easily inserted the right way and not the wrong way, instead of with difficulty either ways. The pad for pin 1 could also be marked so the board layout can be compared with the schematic by someone trying to mount a bigger joystick or a temporary 5 switch board. 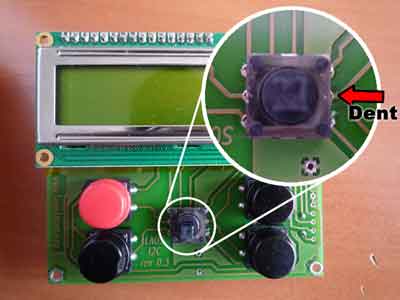 RE: Schematics - Added by jaap over 6 years ago